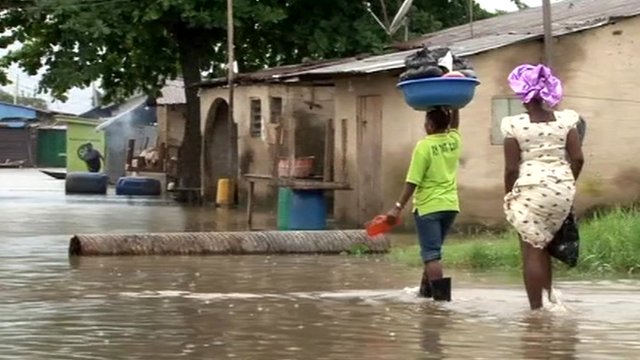 By Dan Shepard and Kingsley Ighobor

As African leaders, climate change experts and scholars understand it, the climate change agreement currently being negotiated and expected to be adopted in Paris in December is an opportunity to emphasize the link between climate and development.

At the Sustainable Development Summit held at the United Nations in New York in September, various African leaders forcefully made the case for a strong climate change agreement in Paris. They said extreme weather variations on the continent had led to devastating human costs, affecting livelihoods. Taking action to address climate change is essential for promoting sustainable development, the leaders told the UN, as they joined in adopting a new global agenda — the Sustainable Development Goals (SDGs) — to end poverty, promote prosperity and protect the environment.

The 196 countries that are parties to the UN Framework Convention on Climate Change (UNFCCC) are negotiating the details of an agreement that will put the world on a pathway to meeting the goal of limiting the rise in global temperature to less than 2 degrees Celsius (which is the point at which climate change’s worst impacts can be prevented) and reduce greenhouse emissions blamed for causing extreme weather variations.

To ensure a unified approach during the negotiations, African experts from the government, the private sector, academia and the media met last March in Addis Ababa, Ethiopia, under the auspices of the UN Economic Commission for Africa (ECA) at the Conference of African Ministers of Finance, jointly organized by the commission and the African Union. At the end of their deliberations, in addition to existing individual countries’ efforts and resources from international partners, the experts requested additional resources to address Africa’s climate change challenges, according to a report on the ECA meeting.

The African experts argued that Africa is contributing little to global warming, and that emissions coming from the activities of multinational companies should be blamed on the beneficiaries of such investments, not on the host countries.

There are many ways climate change is taking a toll on African countries, African heads of state maintained at the UN in September. Nigeria’s new president, Muhammad Buhari, said these include extreme weather variations, rising sea levels, encroaching desertification, excessive rainfall, floods and land degradation. “These developments have devastating human costs and are affecting food security, livelihoods and the very survival of our people,” said President Buhari.

Unlike earlier climate talks that featured “top-down” targets, for the Paris agreement individual countries will come up with plans for carbon reduction. These national plans, designed to make countries accountable for their pledges, will in turn be included in the global goal. Experts do not anticipate the plans, which were submitted before the conference, to be sufficient, and the Paris agreement will need to outline how the world will move forward to strengthen the will needed to avoid the worst impacts of climate change.

African policy makers are aware of the consequences of inaction on climate change, which includes temperatures rising by more than 4 degrees Celsius by the end of the century. According to the Intergovernmental Panel on Climate Change (IPCC), a UN body that evaluates and reports on the state of climate change, the region is already facing faster acceleration of climate change than the rest of the world. “An increase of global temperatures of 2oC by 2050 is going to be catastrophic for Africa,” warns the report at the meeting in Addis Ababa.

The IPCC says there is already increasing evidence of warming over land regions across Africa, which is precipitating patterns, water availability and food security. And African heads of state made it clear at the SDGs Summit in September that any agreement needed to be supported by a climate finance package that will allow their countries to develop low-carbon economies as well as adapt to the impacts of climate change.

For financing climate change adaptation and mitigation activities, Africa will rely heavily on the Green Climate Fund (GCF), which was created by parties to the UNFCCC to assist developing countries. But the snag is that rich countries are slow to fulfill their financial commitments. For example, Japan and the US have disbursed just $15 million of the $4.5 billion each country pledged to support Africa’s efforts. “This is a drop in the ocean,” states the report, adding that Africa may need between $20 billion and $30 billion per year for adaptation.

Some experts are sceptical about the availability of finance to implement any agreement to be reached in Paris. South Africa, which currently chairs the Group of 77 representing 134 developing countries in the negotiations, has advised that a viable finance package is essential for a deal. South African President Jacob Zuma warned that “a Paris package that is hollow and weak on finance would not be acceptable,” urging developed countries to honour existing obligations.

While referring to climate change as the “greatest challenge confronting humankind,” Djibouti President Ismaël Omar Guelleh added that Africa’s request for assistance was legitimate and understandable, because the continent has more to lose than other regions.

Money matters aside, the African experts who met in Addis Ababa would like future discussions about climate change to involve more African experts. “African scientists and scholars are grossly underrepresented in the IPCC process,” they said.

With the ECA recommendations as a guide, African negotiators will argue that any climate change agreement should also include a plan that addresses social issues such as poverty, health, education and gender. Adaptation programmes must be designed by a group that includes representatives from the private sector, civil society and academia.

In addition, African experts will call for more climate observation networks on the continent to assist in real-time monitoring and data collection. The ECA report indicates a need for “appropriate capacity building and technologies for climate-smart development.”

President Zuma wants negotiators in Paris to close the existing ambition gap between now and 2020, including by ramping up action before the new agreement goes into effect to meet the goal of limiting the rise in global temperatures to less than 2 degrees Celsius. It is not yet clear if all the African leaders’ and experts’ recommendations are included in the final agreement.

Meanwhile, as Africa pushes its interests at the negotiations leading up to the Paris conference, the hope is that the current global enthusiasm for a climate change agreement will be matched by action during implementation.