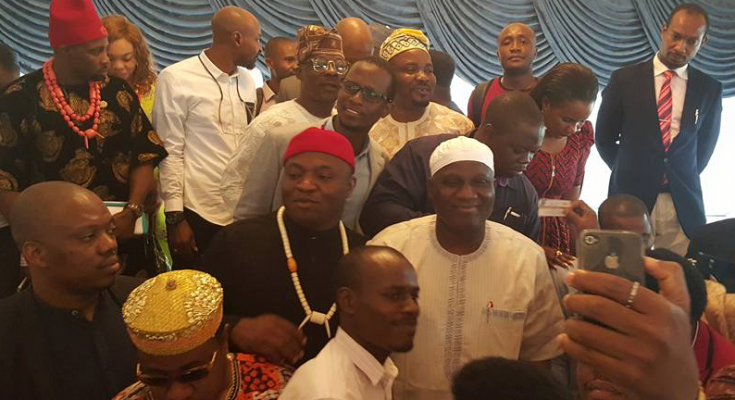 Deputy Speaker, Rt. Hon. Lasun Yussuff seized the opportunity of his attendance at Conference of Speakers and Presiding Officers of the Commonwealth (CSPOC) which took place in Sabah, Malaysia to meet with a delegation of Nigerians in diaspora, against the backdrop of inhuman and derogatory treatment that Nigerians are made to go through in the country.

The Deputy speaker who was deeply concerned by the number of Nigerians alleged to be in Malaysian Prisons, one on death row and other young ones that were lured into the country by prostitution rings under the guise of getting the young ones jobs or to acquire Diploma.

Rt. Hon. Lasun also alluded to the state of our institutions as one of the main reasons why the drift to Malaysia became attractive to these vulnerable Nigerians, noting that Malaysia and Nigeria were both at par in the early eighties while they got it right with a national development plan that successive governments were committed to, but Nigeria veered off track, and saddled with leaders without articulate vision for the country. The number two citizen of the green chamber however allayed fears and assured Nigerians that it‚Äôs a renaissance that the Buhari years will take the nation to.

On the part of the Deputy Speaker, Rt. Hon Lasun Yussuff, he assured the Diaspora community of the resolve of the Buhari administration to resolutely tackle some of the numerous challenges confronting the country, emphasizing that the Federal Government is poised to take the critical steps in repositioning Nigeria towards the path of greatness again and those in diaspora won‚Äôt be left behind.

He stressed further on the need for the citizens in the diaspora specifically those in Maylasia to organize themselves in keeping their links to their motherland for the purpose of contributing to her development. He urged them to key into government‚Äôs effort at creating a new Nigeria.

He however admonished Nigerians in Malaysia to remain law abiding and forthright. He equally commended them for their individual achievements which has given the country a positive image assuring them that all their demands put forward will be thoroughly looked into and that his visit to Malaysia will yield them positive and desirous results.

The interactive session was however facilitated by the hardworking and very hospitable Acting High Commissioner of Nigeria to Malaysia, Mrs. Janet Odeka and her very warm staff, including Mr Oyemade; Ajofoyinbo to mention a few. Their contributions unveiled how the embassy is being stretched by the excesses of many unscrupulous Nigerians who come into Malaysia on social visas and veer off to want to study, and some who outrightly abuse their entry clearance(visa).

They as well refered to others who are involved in many devious activities, yet the Acting High Commissioner will not hesitate to rise up to help when the situation calls for it. Confirming the kind gesture of the acting High Commissioner, Nigerians in Malaysia said ”this seasoned diplomat deserves encouragement and commendation. Her kindness over the years has got her a new name, known as our mummy”. They unanimously said.

Nigeria Elections: A rare opportunity to get things right