Home POLITICS Agunloye: The Chicken has finally come to roost 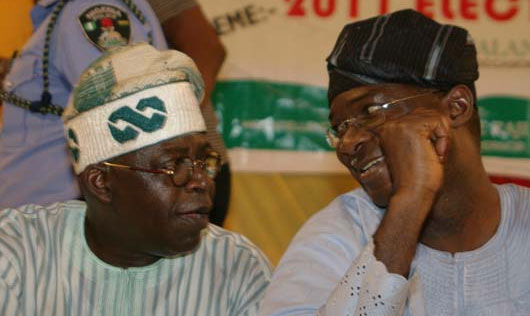 Agunloye: The Chicken has finally come to roost

Even in party politics truth is constant, no matter its inherent intrigues. But not so the vacillating, chameleonic characteristics of some self-serving politicians who swim with every political tide, so far the price is right. Lacking in enduring personal principles and swayed by the lure of the lucre, this group of politicians has been aptly labeled Any Party In Power (AGIP) in the Nigerian context.

One interesting example of such politicians whose attitudes change as swiftly as the tropic weather is none other than Dr. Olu Agunloye. Only a month ago, he was one of the candidates who vied for the gubernatorial candidacy of the Action Congress of Nigeria(ACN) for the forth coming poll in October. But now he is back again to the Labour Party,LP which he has previously lampooned for lack of vision, to pledge support for Governor Mimiko’s second term ambition. Talk about the African description of a bat as neither a bird nor a rat.

It is a notorious fact that this is not the first time he is exhibiting such a terrible trait. It has become his stock-in-trade to jump ship once his self-serving political ambition is not fulfilled. In fact, his serial betrayal habit can be traced back to 1999.Then, the Alliance for Democracy(AD) had unanimously adopted Chief Adebayo Adefarati ( now late) as the gubernatorial candidate. But Agunloye, who incidentally hails from the same Akokoland stood against Adefarati to the shock of the party leadership. He lost his bid, of course. But there was more to come from his bag of poly-tricks.

The ugly betrayal streak in him reared its ugly head again in December, 2002 when the agents of darkness shot and killed the hugely popular Chief Bola Ige (of blessed memory).Though Agunloye was the personal assistant to Ige who had served as the Minister of Power and Steel and subsequently, as the Attorney General and Minister of Justice, he betrayed the cause of the progressives against the reactionary forces by joining the Chief Olusegun Obasanjo’s government as the Minster-of-State for Defence. Not done, his wily and crafty nature came to the fore again, when he colluded with Olusegun Agagu, as the PDP arrowhead in Ondo State to rig Adefarati out of power in 2003.That was when the anti-people party’s rigging machinery bulldozed its way through the South-West, winning nebulous and controversial victory to the amazement of patriots.

It was not long however, that he stabbed the same Agagu in the back when he threw his weight behind Mimiko to get Agagu out of power as the governor. And acting more like a slippery, fictional character in a political thriller of a power game Mimiko having known Agunloye’s antecedents pitched his tent with Professor Ajayi Borrofice, the Asiwaju of Akokoland to scuttle Agunloye’s senatorial ambition.

Against this misty backdrop, the ACN political party hierarchy had to exercise caution to find out who is really committed to its party’s ideals. Though naturally, those seeking for political posts swarm like the butterflies, the birds and the bees to the flower’s nectar, it must be able to identify only those ready to pollinate the state with veritable ideas rather than suck it dry. With years of sound political engineering experience, the ACN has been careful in its choice of gubernatorial candidate for the sunshine state. Just like it had done in Lagos, Ekiti, Osun, Edo, Ogun and Oyo states, quality leadership is its guiding credo. Characteristic of its painstaking sifting mechanisms to bring out only the best of men to occupy sensitive political posts, it was able to identify Agunloye as a mole planted by the Labour Party within the ACN.

Having studied his past in politics, it was discovered that this indeed is a man driven more by the passion for self aggrandizement than pursuing the common good, the fulcrum on which the party rests its levers of power. For instance, Agunloye had crawled back to the party thinking that he would win the 2011 senatorial poll. But he lost woefully to Prof. Ajayi Boroffice and Dr.Bode Olajumoke of the PDP even in his ward, from the same Akokoland.

Besides, it is a painful reality that with his years in party politics and as a Minister, Agunloye cannot point to any visible structure as his achievement for his people. How then would ACN go ahead to give a nod for his governorship ambition, when he could not win as a senator? Notably, when he decamped from LP to ACN he did not come in with a single follower. The structures he has been bragging about are that of the ACN he met on ground.

Interestingly too, now that he has jumped back to LP, he has done so without a single coordinator moving along with him. In fact, one of his closest associates, Mr. Femi Johnson, now the Deputy Director General of ACN Campaign Organisation in Ondo -South and all his supporters have since pledged their unalloyed loyalty to the ACN and its leadership, ahead of the coming governorship elections.

The ACN leadership had it suspicions, that just as Olu Adegeroye was planted by the PDP in the defunct Action Congress, AC for the 2007 general elections, it is the same way that the LP has used Agunloye as the hidden cankerworm within the ACN foliage. The huge sums of money he was spending was a justification of Mimiko’s tacit funding of Agunloye’s ambition within the party.

In addition, since he declared his ambition to run for the governorship of the state on the platform of the party, Chief Bisi Akande, the National Chairman has been receiving a deluge of text messages from Ondo state, alluding to the fact that he had an ace up his sleeve. He had to pass some of the messages to Mrs. Jumoke Anifowose, who was then the Chairman of the party. But the party has seen through Agunloye’s political shenanigan and acted swiftly. If ACN had chosen him as the governorship candidate and goes on to win the election, it is apparent that he will jump ship again, to either the PDP or LP the former parties.

To succeed in politics as it is with life, trust must be sacrosanct. But like a bird ever in flight for the next fruit to savour, Agunloye has not been able to perch and stay true to any political ideology. Was he no t the same man who said that: “We do not have government in Ondo state. We only have a governor of market builders who lacks vision on how to run government” Of course he said so. Similarly, it is on record that the same Agunloye painted “ Mimiko as the worst governor that Ondo state has ever produced. With close to N550 billion accruing to the state in the last three years there is nothing on ground to justify the huge amount of money. Ondo state cannot continue with this government in another four years.” Now the same man has gone back to his vomit. Must one trade his honour and integrity for a pittance?

It would interest all readers to know that in spite of all the media hype and several awards to his credit Mimiko has not constructed a single road either in Ondo his home town or Akokoland where Agunloye hails from. His exit from the ACN is good riddance to bad rubbish to an irredeemable political traitor.

As Burke, the erudite philosopher once rightly observed:” The only thing necessary for the triumph of evil is for good men to do nothing”. The ACN, as a solid platform for progressive minds cannot but rise up to the challenge of salvaging Ondo state from the stranglehold of inept political leadership.

Ajanaku is director of media, publicity and strategy for the campaign organization of Ondo ACN candidate, Akeredolu