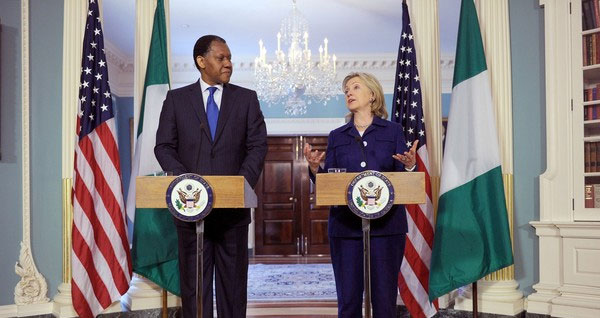 An ambassador from a corrupt, oil-rich African nation. A journalist who moonlights as an activist. A disbarred lawyer and his client, a questionable businesswoman. And millions of dollars missing.

It sounds like the makings of a screenplay. But it’s a real, budding scandal that’s rocking the Nigerian embassy in Washington, D.C. and the country’s extensive diaspora throughout the United States.

Nigerian immigrants in the U.S. claim Ambassador Adebowale Adefuye has refused to probe allegations that diplomats have embezzled $25 million from embassy accounts since 2004. Adefuye, who took his post in 2010, is now likely part of the scheme, they say.

The American-born controversy reflects the murky intrigues of Nigeria, where corruption is routine and ethnic tensions color most every newsbreak.

University of New Hampshire History Professor Funso Afolayan knew Adefuye when the two men worked as history professors in Nigeria in the 1980s. Speaking with Latitude News, Afolayan describes his one-time colleague as a fine scholar with a “reputation for integrity.”

And yet he cautions widespread corruption on the part of Nigerian officials has made him into a something of a cynic: “I’m not shocked by these allegations of corruption. I’m not even surprised. To me, it would be a surprise if he were not accused of corruption. It’s unfortunate. But it’s a sad commentary on Nigerian politics.”

Now Nigerian-Americans are staging a two-day protest they’re calling “Occupy the Nigerian Embassy” that starts today. A small crowd showed up for the demonstration, says an embassy official. Around 253,000 Nigerian-Americans currently live in the U.S., mainly in the south and northeast, making them America’s largest community of African immigrants.

Carl Umunna is one of them. A journalist and self-described human rights activist who lives in New York City, Umunna is helping to plan the demonstration.  “All the institutions in Nigeria,” he tells Latitude News, “are corrupt, and the Nigerian embassy is no exception. They care only for themselves. They are here to make money, not to protect the people.”

Over the last few years, $25 million has disappeared from an embassy bank account that housed profits from the sale of embassy-owned houses in the D.C. area in 2004, Umunna says.

The journalist adds that the embassy is now persecuting the American-based lawyer who originally revealed the theft, Emeka Ugwuonye. Ugwuonye, who represented the embassy in the land deals, was briefly arrested last year in Nigeria and is currently being sued in Maryland, where he was suspended from the state bar association, for stealing $1.5 million from the embassy’s accounts.

“This accusation against me is retaliation. It is manipulative,” Ugwuonye tells Latitude News. “But the ambassador has chosen the wrong person. In Nigeria, thousands of people are treated like this, arrested, even killed. This is considered normal. But I am someone who can fight back.”

Umunna is demanding the resignation of Ambassador Adefuye and an audit of the embassy’s finances. His protest is receiving coverage in Nigeria.

Last week, The Leadership, a popular Nigerian newspaper, ran a story on the allegations against the embassy. The paper reported claims from a Nigerian businesswoman, Carol Olubufunmi, who said officials had stolen $528,000 from her nonprofit, which had organized a conference on African women in Washington.

The embassy called her a fraudster and said her conference was a sham.

Indeed, serious questions have been raised about the reliability of the embassy’s accusers. Guess who is Olubufunmi’s lawyer. Answer: Emeka Ugwuonye.

The professor added that one of the authors of The Leadership article, Chuks Ohuegbe, is considered an ally of Ugwuonye.

The controversy reflects Nigeria’s all-consuming ethnic division between Igbo and Yoruba-speaking peoples. All three men – Ugwuonye, Ohuegbe and Umunna – are Igbo. The ambassador is Yoruba. Their heritage has led to speculation that their campaign against him is racially motivated.

But it’s also possible that their claims have some validity.

Earlier this month, Nigerian press reports suggested that American authorities had frozen the embassy’s account in March over concerns about money laundering. A spokesperson for the Nigerian embassy, Stephen Baba, denies those charges. He tells Latitude News that M & T Bank “could no longer hold our account because of restrictions put on them by the U.S. government and the Patriot Act.” The embassy has since switched to Citibank, he says.

Baba says the closure had nothing to do with financial irregularities or ties to terrorist groups but would not go into further detail, claiming he didn’t have the relevant information.

Bank accounts of other embassies have suffered a similar fate in recent months, according to Bloomberg.

The U.S. Treasury Dept. referred Latitude News to M & T Bank, which did not return requests for comment.

Ultimately, it’s difficult to know what to believe in a country with a global reputation for fraud.

“These people are of a very shady character,” says Professor Afolayan. “Even if there is any truth in their allegations, they are not the kind of characters who are in a position to prove it, or make it stick.”