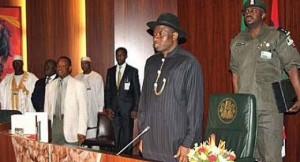 The Federal Executive Council (FEC) says it has no intention to discard the Seven-Point Agenda initiated by the late President Umaru Yar’Adua.

Minister of State for Information and Communications Labaran Maku gave the stance of FEC after Wednesday’s Council meeting presided over by President Goodluck Jonathan at the Presidential Villa, Abuja.

Maku, who briefed State House correspondents, said the report in some national dailies that a memo had been sent to FEC for a review of the initiative was not correct.

“We wish to state for the record that at no point in time did this administration decide to jettison the Seven-Point Agenda. The Seven-Point Agenda was adopted by this administration since inauguration and at no time was any decision made for that Agenda to be jettisoned. We want the press to at least try to verify facts before they run to conclusion. We want to tell you frankly speaking, that the story is untrue.”

“What this government has done always is to continuously look at ways of improving on the Agenda to ensure that the Agenda is carried out and ensuring that the services intended by the Agenda are carried out,’’ he said.

Meanwhile, the Council has approved the award of contract for the completion of infrastructure in Katampe District of FCT for N61.19 billion, with three years’ completion period.

FCT Minister, Sen. Bala Mohammed, who announced this at the briefing, said the contract would be executed under the Public-Private Project initiative.

He said five years was approved for the company to recover the fund.

Mohammed added that prospective allottees of plots in the area would henceforth pay N12,000 for a square metre of  land.