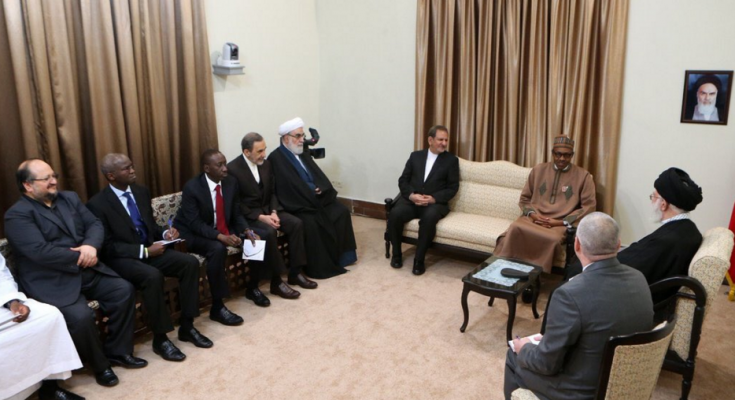 Iranian supreme leader Ayatollah Seyyed Ali Khamenei on Monday met with President Muhammadu Buhari before the start of the third summit of the Gas Exporting Countries Forum (GECF) in Tehran. During the meeting, President Buhari and the Iranian leader discussed a wide-range of bilateral issues, including oil and gas and how to suppress terrorism.

Ayatollah Khamenei while congratulating President Buhari on his election and wishing him best of luck on his efforts to rid Nigeria of organized terror group like BokoHaram, also warned the president not to trust the West, particularly the United States, in the fight against Boko Haram.

“International coalitions claiming to fight terrorist are by no means trustworthy, since the very destructive elements such as the US are behind the scenes of creating or supporting terrorists like Daesh [also known as Islamic State of Iraq and the Levant, ISIL or ISIS],” said Ayatollah Khamenei.

“According to accurate intelligence, the US and some reactionary regional countries are directly helping Daesh in Iraq and are playing a destructive role.”

The Iranian leader also called for a robust cooperation and partnerships among Islamic countries against those he referred to as “Islam’s open enemies” and “foes that bear enmity with Islam in the name of Islam.” Although, Nigeria is a secular country, it’s however largely populated by muslims and it’s a member of the Organisation of Islamic Cooperation (OIC).