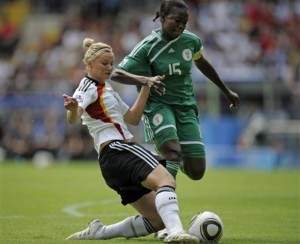 The Presidency (Abuja) - President Goodluck Ebele Jonathan has expressed the nation’s sincerest appreciation of the exemplary dedication, patriotism, commitment to national service and excellence which Nigeria’s Falconets put on display at the just concluded 2010 FIFA Under-20 Women’s World Cup in Germany.

In a message to the team after Sunday’s final match, President Jonathan saluted the immense courage, determination, doggedness, stamina, skills and sense of national pride which were a very visible feature of the team’s performance in all the matches they played in the tournament.

Noting that doing one’s best whenever the opportunity presents itself to serve one’s nation is the most any country can ask of its people, the President said that the entire nation was proud of the Falconets in spite of their loss to the hosts in final because they clearly tried, to the very best of their-God-given abilities, and against all odds, to win the ultimate prize of the competition for Nigeria.

A press statement signed by the President’s Special Adviser, Media and Publicity, Mr Ima Niboro, on Sunday August 1, quoted President Jonathan as saying: “Wearing our national colours as you did in Germany, with self-belief, patriotic commitment, discipline and a burning desire to achieve victory for our dear nation is what we expect from all our sportsmen and women.

“The entire nation followed your matches with keen interest and we were all positively inspired by your very apparent dedication and commitment to national service.

“I fully believe that with the great human and natural resources our country is blessed with, there can be no limits to our progress as a people if more of our compatriots follow your fine example and put their very best effort into all that they do in whatever area of human endeavour they are called upon to serve Nigeria,” President Jonathan told the team.

He looks forward to receiving the Falconets on their return.