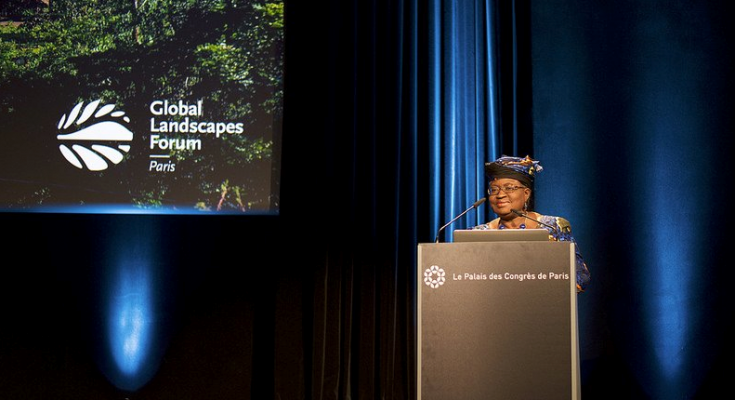 Your Excellencies, Ladies and Gentlemen, I am very happy to address this Forum of special importance to developing countries. Their rural areas still include 70% of the world’s poorest people. Growth that attacks poverty and food insecurity is a dominant concern here. And agriculture accounts for most of employment—more than 2/3 in Africa—and a substantial share of GDP in most countries.

Developing countries are not only aware of climate change, but many of them are already living with the consequences. They worry about the most recentpredictions from IPCC that food production per capita in their countries will be sharply lower in the coming decades. Most have put increasing food productivity and increasing the resilience of rural livelihoods at the top of the policy agenda.

Yet land use is also vital to addressing climate change. The Global Commission on the Economy and Climate, of which I am a member, has featured land use issues in its New Climate Economy project. It finds that land use interventions can produce from 15% to 35% of the needed mitigation to get the world back to a 2 degree Celsius climate pathway by 2030. It also shows this path to be unlikely without a big contribution from these interventions in developing countries.

This Forum addresses the main need for going forward, a stronger consensus that landscape restoration is critical to achieving a vital “triple win” for development and climate: increasing rural productivity, resilience, and mitigation simultaneously.

According to FAO, a staggering third of all agricultural landscapes are now degraded, mostly in developing countries. Worse, 12 million ha net are being added each year to that total. Degraded landscapes threaten the ability of countries to provide stable livelihoods to rural people.

Solutions need to come from those most directly involved. India for example has led on forest restoration. By 2030, additional forest and tree cover is expected to absorb at least 2.5 Gt CO2e. Prime Minister Modi put it very nicely in the Financial Times last Sunday: “The instinct of our culture is to take a sustainable path to development. When a child is born, we plant a tree.”

The massive restoration of China’s Loess Plateau from the mid-1990s onwards is another. Annual household incomes grew from US$70 to US$200 per person over the first decade, through agricultural productivity gains and diversification. Soil losses were reduced by 100 million tonnes per year, and massive amounts of new biomass and soil carbon sequestered.

In Niger a change in the Forest Code in the 1990s encouraged farmers in the center-south to increase trees within their fields 10- to 20-fold. Five million ha of affected cropped land now produce 20% more grain per ha. Gross annual income in the region has more than doubled in real terms for one million households. And an additional 3-4 Mt CO2e per year are being sequestered, according to work by ICRAF. Over 1 million ha have already been restored by similar means in northern Ethiopia.

Commitment for change is growing. Thirty-five African countries submitted INDCs that mention land use interventions. Most of these expect benefits such as higher yields, reduced erosion, and less loss of productive land. Thirteen have detailed quantitative targets for emissions reduction through land use interventions that would lead to 1.2 Gt CO2e in reduced emissions over the next 10 years, an amount equivalent to more than one-third of Africa’s current total annual emissions.

But developing countries will need help from others to deliver. A Working Paper released today by the New Climate Economy project finds that US$250 billion per year is needed for funding landscape conservation and restoration in developing countries. In fact, only US$25 billion a year are invested this way; 60% of this is from domestic budgets. The balance of US$10 billion from external sources is public foreign assistance, offsets, and philanthropy.

How can this need be met where most of the land in question is densely occupied, often by very poor people? Public funding needs to play a large role. Communities typically need to stop planting or grazing on steep slopes, which have to be reforested. Terracing or other forms of land and water management for agriculture are often necessary. Property rights and responsibilities of those on the land need to be formalized. Yet total annual expenditures by Ministries of Agriculture and of the Environment combined in developing countries do not exceed $50 billion from domestic sources, and total ODA in agriculture has been of the order of US$3-4 billion per year, with perhaps another US$1 billion plus for forests.

Part of the answer has to be to leverage more private investment. Where public and private work together, the agricultural and forestry incomes generated can go a long way towards paying for required investments in the resilience of agriculture and forest landscapes. Most importantly, local populations become part of the solution.

The good news is that there is more than US$100 trillion in private investment capital, and interest rates are very low. The bad news is that landscape investments in developing countries are inherently risky, especially where smallholders and poor forest communities are involved. There are institutional and infrastructure deficiencies, missing skills, market risks, political risks, and weather variability. These all keep bond investors away. A recent review by the Climate Bonds Initiative found that while there were US$ half-a-trillion in Green-themed bonds being held globally in 2013, less than 1% of these were for land use investments.

The NCE Working Paper being released today suggests a way forward through structured capital partnerships put together by “Impact Investors.” Such investments in land use in developing countries have been of the order of US$1 billion per year to 2013. But the amount is expected to continue to double every 4-5 years going forward.