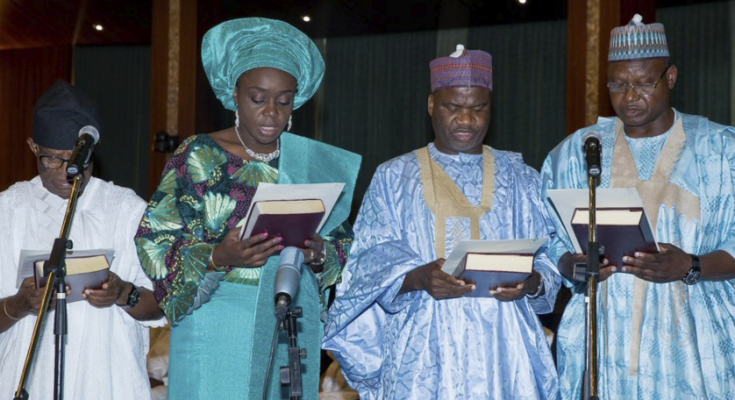 Nigerian President Muhammadu Buhari appointed former investment banker Kemi Adeosun as finance minister as he swore in his cabinet on Wednesday, more than seven months after he won the election that ushered in the first democratic handover of power in Africa’s biggest economy.

For many investors in Nigeria, the key consideration is what is done in terms of FX policy,” Razia Khan, chief economist for Africa at Standard Chartered Plc in London, said in e-mailed comments. “Adeosun’s seeming endorsement of current FX policy choices during her senate testimony will disappoint investors who had been hoping for more rapid liberalization of Nigeria’s FX market.

Adebayo Shittu, the newly appointed communications minister responsible for mobile-phone operators, told Lagos-based Channels TV after the swearing in ceremony, that monies owed to the nation will be paid, without being specific. MTN is contesting the fine. Read more

Nigerian President Muhammadu Buhari has sworn in a 36-member Cabinet that includes himself as the country’s minister of petroleum.

The delay in naming ministers caused uncertainty about the economy and the fight against Boko Haram. Critics said the president was taking on too much responsibility and power.

The new Cabinet is made up of political veterans and technocrats representing each of Nigeria’s 36 states. Read more

Time to get down to business in Nigeria

For months, Nigeria was without a government while President Muhammadu Buhari personally vetted his ministerial appointments as part of an election promise to combat corruption.

Now with the cabinet in place, he must bolster an economy hammered by falling oil prices and tackle the Boko Haram insurgency in the north-east. Read more

Buhari tried to win back investors for Africa’s largest but stumbling economy on Wednesday by inaugurating his cabinet after a long vetting period he had said was necessary to avoid corruption.

He had been virtually in sole charge since taking office in May, with ministries run only by senior civil servants, a practice that had prompted opposition charges of autocracy.

Finance Minister Adeosun trained in accountancy in Britain. She recently served as finance commissioner of Nigeria’s southwestern state of Ogun and was a former manager with auditing firm Pricewaterhouse Coopers.

Growth in Nigeria is currently running at just 2.35 percent, while inflation is creeping towards 10 percent. Read more

In the end, the wait lasted 166 days, but Nigeria finally has a full government cabinet after president Muhammadu Buhari swore in thirty-six ministers on Wednesday (Nov. 11) in Abuja. The nominated ministers had been announced last month as they underwent screening at the Senate but in an elaborate ceremony that lasted two hours, the new ministers were assigned portfolios.

Fashola’s assignment, which combines two key ministries, suggests that he will be one of the most important members of Buhari’s cabinet and while it represents an immense challenge, it also presents a great opportunity for Fashola to cement his reputation as one of the country’s leading political players. It also puts him in a strong position as a potential successor to president Buhari following his impressive eight-year stint in charge of Nigeria’s most populous and important city.

As expected, Buhari will lead the ministry of petroleum while Kachikwu Ibe will serve as state minister of petroleum. It is unclear how this will affect Ibe’s current role as boss of state oil firm, NNPC. Read more