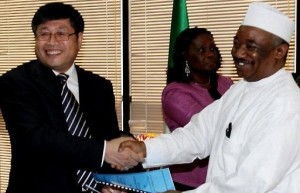 China has signed a deal to build an eight-billion-dollar refinery in Nigeria, a government official said on Tuesday, in a fresh example of Beijing’s aggressive investment in Africa.

The agreement also highlights Nigeria’s lack of fuel and electricity despite being one of the world’s largest oil producers, with the country’s refineries malfunctioning and having been hampered by corruption.

China State Construction Engineering Corporation (CSCEC) signed the deal with Nigeria to build the refinery in the commercial hub of Lagos, a sprawling city of some 15 million people that experiences regular power outages.

Bello said the refinery, to be located in Lagos’ Lekki free trade zone, will have the capacity to refine 300,000 barrels of oil per day and 500,000 metric tonnes of liquefied petroleum gas per year.

The Chinese state firm will contribute 80 percent of the capital while the NNPC will take care of the remaining 20 percent, he said.

Lagos state government will provide the land and infrastructure.

The Lagos refinery is part of a huge 23-billion-dollar deal to build three refineries and a petrochemical complex in one of Africa’s biggest tie-ups with China.

The new refineries are expected to add some 750,000 barrels per day capacity in Nigeria, according to NNPC.

The west African country, a member of OPEC, relies on crude exports for more than 95 percent of its foreign exchange earnings but imports about 60 percent of its local fuel needs because state refineries are barely functional.

Nigeria’s four refineries — with total capacity of 445,000 barrels per day — are using less than 30 percent of their installed capacity, according to official figures.

Corruption and poor maintenance have undermined their performance.