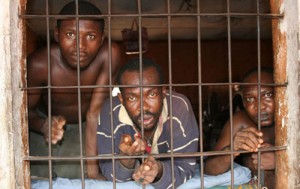 The Nigerian government should reverse plans to resume executions and instead address underlying problems in the country’s criminal justice system, Amnesty International, Human Rights Watch, the Nigerian Bar Association Human Rights Institute, and other Nigerian human rights nongovernmental organizations said today. The reason given by the authorities for the resumption is to ease prison congestion.

Many death row prisoners may be innocent, as Nigeria’s justice system is riddled with flaws and is unable to guarantee fair trials, the groups said. The overcrowding is in part due to delays in trials and failure to provide enough lawyers.

The decision to execute death row inmates to ease prison congestion was taken at a meeting of the National Economic Council (NEC) on Tuesday, June 15, 2010. The meeting was chaired by the vice president of Nigeria and attended by Nigeria’s 36 state governors. Following the meeting, the governor of Benue State announced that the council had asked the Nigerian state governors to review all cases of death row inmates and to sign execution warrants as a means of decongesting the country’s prisons. This is the second time in two months that Nigeria’s state governors have considered the execution of inmates to ease prison congestion. In April 2010, a similar decision was taken in a meeting of the Council of State, a meeting of the 36 state governors, chaired by the president of Nigeria.

The resumption of executions is the wrong solution to the problem of overcrowding; prisons will remain overcrowded until the real underlying problems are addressed, the groups said. According to Nigeria’s minister of interior, the total prison population is 46,000, of which 30,000 are awaiting trial. Few inmates can afford a lawyer, and the government funded Legal Aid Council only has about 100 lawyers.

There are approximately 870 death row inmates in Nigeria’s prisons, including women and juveniles. However, weaknesses in the Nigerian criminal justice system mean that hundreds of those awaiting execution on Nigeria’s death rows did not receive a fair trial and may therefore be innocent, the groups added.

Trials can take more than 10 years to conclude. Appeals in some death row cases have been pending for a decade. Some appeals are never heard because case files have been lost but the person remains on death row.

Two expert groups set up by former president Olusegun Obasanjo - the National Study Group on Death Penalty (2004) and the Presidential Commission on Reform of the Administration of Justice (2007) - recommended a moratorium on executions because the criminal justice system cannot guarantee a fair trial.

The organizations called on the Nigerian government to establish an official moratorium on the death penalty as a first step toward abolition. By declaring a formal moratorium on executions, the Federal Government of Nigeria would be exercising important leadership on the issue of the death penalty in line with the global trend toward abolition. A moratorium on executions requires a commitment by all Nigerian authorities not to carry out executions, regardless of whether death sentences have been passed. A moratorium would eliminate the risk of executing the innocent as well as prisoners who have not yet exhausted their right to appeal.

Amnesty International, Human Rights Watch, the Nigerian Bar Association Human Rights Institute, and other Nigerian human rights nongovernmental organizations oppose the death penalty in all cases without exception regardless of the nature of the crime, the characteristics of the offender, or the method used by the state to kill the prisoner.

Background
Under international human rights law, the death penalty must not be imposed for crimes committed by people below 18 years of age and people charged with capital crimes are entitled to the strictest observance of all fair trial guarantees.

While Nigeria did not adopt an official moratorium on executions, the Federal Minister of Foreign Affairs stated in February 2009 at the 4th Session of the United Nations Universal Periodic Review (UPR) at the UN Human Rights Council that Nigeria has a “self-imposed moratorium.”

In 2006, at least six death row prisoners were executed without having had an opportunity to appeal their death sentence. They had been tried and convicted by Robbery and Firearms Tribunals under the jurisdiction of the military.

Any step by the Nigerian government, state or federal, to resume executions will be contrary to commitments made by Nigeria at the international level.