Nigeria Elections: A rare opportunity to get things right

In about a week, Nigerians will go to the poll, in what is set to be historic elections, to elect political office holders, that includes the office of the president.

The 2011 presidential election could prove to be the most competitive  in Nigerian history. Three major candidates with significant national spread are poised to contest for voters nod, on who should rule Africa’s most populous nation for a term of four years - until 2015.

Since the emergence of Buhari as the presidential candidate of the CPC, back in January, the former Head of State has witnessed significant increased in popularity and acceptance across Nigeria’s diverse political spectrum.

During the same period, President Jonathan - the ruling party’s candidate - has suffered decline in popularity, in the wake of his party’s internal wrangling and increase resentment by many Nigerians, who see the party’s 12 years rule as a major set back for the country.

According to John Momoh, a political science lecturer and commentator on Africa’s politics, “There are genuine reasons for  Nigerians to rethink PDP leadership over the country…close to 12 years now, there has not been significant improvement in  the well-being of an average Nigerian. More than 50 per cent of the Nigerian youth remains unemployed, insecurity of lives and properties is alarming, and there is no transparency and accountability in government. And while all these things remain as they are, there are considerable evidence that political corruption and mismanagement of the country’s wealth still remain pervasive”

Among political watchers, it is widely believe that the April poll  could give Buhari - widely known as a disciplinarian - his best chance to become Nigeria’s president after two consecutive and unsuccessful bid in 2003 and 2007.

Having had a short privilege to administered Nigeria, in his capacity as Head of State - from December 1983 to August 1985 - supporters of Buhari vow of his simplicity, integrity and his incorruptibility.

Backed in 1984, Buhari as a military leader, did identified corruption as the country’s biggest problem.

“While corruption and indiscipline have been associated with our state of under-development, these two evils in our body politic have attained unprecedented height in the past few years”… “This government will not tolerate kick-backs, inflation of contracts and over-invoicing of imports etc. Nor will it condone forgery, fraud, embezzlement, misuse and abuse of office and illegal dealings in foreign exchange and smuggling, ” he said.

A campaign group - Buhari/Bakare Diaspora Team - which is committed to sensitizing Nigerians on the upcoming poll argues that despite years of promises to fight corruption and improve on government accountability, the ruling party, which has been in power since 1999, has failed to use the nation’s oil driven wealth for the benefit of majority of Nigerians.

As a result, the country still remains one of the most corrupt in the world, losing  hundreds of billions to political corruption, while the generality of the Nigerian masses live below acceptable poverty line.

Although despised by some of his political opponents, notably of the elites - perhaps because of his radical and grassroots ideology - many still accorded Buhari unequal respect that no other candidates for the post of the president currently enjoy.

“Muhammadu Buhari as a member of the Supreme Military Council and as the head of the petroleum dept was by nature taciturn and introvert. But he took any work given to him very seriously and if he failed at whatever he did, it would not be because he did not put his best, in fact, his very best. He was as reliable as he was hard working and honest,”  former Nigeria’s President Olusegun Obasanjo wrote in his book, Not My Will, published in 1990.

Another prominent statesman, Olu Falae was quoted by one of Nigeria’s dailies, ThisDay in 2007 to have describe Buhari  as follow, “Buhari has three qualities namely integrity, which even his worst enemies can’t fault; he is consistent, he does not say one thing in the morning and another at night, and he is committed to implementing the restructuring of the country. Anyone with these qualities deserves the support of Nigerians.”

When confronted with the choice of Buhari, many of his critics complaint about the strongman perceived extreme religious ties.

In a country that is heavily polarized by religious and ethnic sentiments, it is not surprising that some Nigerians, especially those from southern part of the country reluctantly identified Buhari’s faith - as a muslim - to be of major concern.

Buhari, on number of times, has refutes such perception and endeavour to open himself to public scrutiny.

Political observers believe that the choice of his running mate, a popular evangelical pastor in Lagos, Tunde Bakare, was another attempt by the Buhari campaign team to appeal to undecided voters.

Although, the incumbent president, Goodluck Jonathan, of the ruling party, remains the candidate to beat, the Buhari- Bakare campaign team hope to pull an upset or a highly possible run-off.

One of the challenges that will be before Nigeria’s 60 million voters in the coming days is to determine the kind of Nigeria they will like to set in motion for the next decades.

While the country, five decades after independent is still rooted in sentiments and patronage that have hinder its progress and development, many hope that this time around, voters will be bold to make a clear statement on the right kind of leadership the nation desire.

Yemi Ifegbuyi is a senior editorialist and director of operations for SBG media, publisher of nigeriansbaroadlive.com. He is also a strategic communications consultant on politics and business development, with special interest in North-America, Asia and sub-Sahara Africa. Follow him on Twitter: @tweetyemi 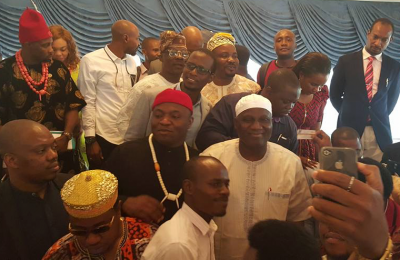 One thought on “Nigeria Elections: A rare opportunity to get things right”