Home FEATURED Explain it to me: How Ooni of Ife’s death should be announced 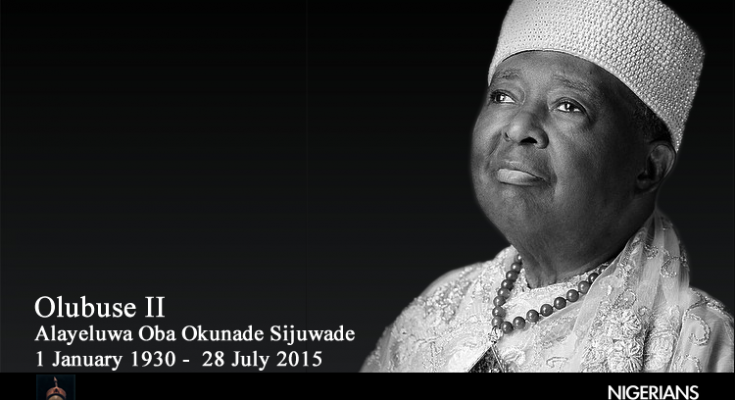 Explain it to me: How Ooni of Ife’s death should be announced

Yoruba has a rich tradition. The age-long culture gives form, content and predictability to the beliefs of its people. The custom has been inherited from generation to generation. The symbol of the unity of the race is kingship. Its cradle is Ile-Ife, the cherished sacred abode of its progenitor, Oduduwa.

Whenever the Owooni (Ooni) Adimula joins his ancestors, the news is not broken without following the due process of culture. Ooni is the property of Yoruba race. He is the custodian of the household of Oduduwa, its shrine and the protector of its legacies. Therefore, it is absolutely a taboo for any prince, royal family and palace chiefs to break the news without clearance or approval from the appropriate traditional quarters.

The announcement of the Ooni’s death is a traditional role conferred on his brother, the Oore of Otun and Mobaland, a son of Oduduwa and one of the 16 foremost monarchs in Yorubaland. The reigning Oore is Oba Adedapo Popoola, an economist and chartered accountant.

After ascertaining that the Ooni has waja (died), the palace chiefs are expected to inform the Oore. The Oore will mourn his passage in a traditional way. He will not waste time in breaking the news to other Oduduwa children, especially the Alaafin, the descendant of Oranmiyan Akinorun, the Ewi of Ado-Ekiti, the Oba of Benin, the Onipopo of Popo, the Onisabe of Sabe, and the Owa Obokun Adimula. The Oore will also carry along the Ajero Asotemaru, the Alara and the Obalufon Alayemore.

The foremost rulers will break the news to their towns and vassal towns. Days of mourning will be declared. The attention of the towns and villages will focus on Ile-Ife, the Orirun, where their kings obtained their legitimate crowns.

After the new Ooni is crowned, Yoruba monarchs will accord him automatic recognition and respect. He may visit selected palaces of his brother obas in the spirit of brotherhood. As a prince, the history of the race must be on his lip. He is expected to be factual. In the days of yore, the Ooni was the custodian of knowledge. Thus, during the early days of colonial era, Owooni Derin Ologbenla, the Ooni of Ife, who doubled as the Baale of Oke-Igbo, was the only son of Oduduwa, whose testimony could be trusted when the foreigners were trying to resolve the rift between the Awujale of Ijebuland and the Epe monarch over land. The Ooni declared that Epe and Ikorodu were extension of Ijebuland. His evidence was upheld by the British.

Also, only the Ooni’s voice was trusted by the colonial masters  in ascertaining the authenticity of claims and counter-claims to royal crowns by the children of Oduduwa. In those days, there was no rival between the Ooni and the Alaafin of Oyo empire. While the Alaafin’s empire extended from Ilorin, where Afonja rebelled against the suzerain, to Popo and Sabe in the present-day Republic of Benin, he still regarded Ife as his ancestral home. Thus, there was no friction, but cooperative governance, based on history and traditional consultations.

But, neither Ooni nor Alaafin could prevent communal clashes and wars that ravaged Yorubaland for over 100 years. The wars were motivated by expansionist tendencies and desire for autonomy. The old Oyo empire was weakened by the Fulani warriors who assisted Afonja to sustain his rebellion against Alaafin. Later, these intruders who wanted to run over Yorubaland to dip the Koran in the Lagos Lagoon were stopped by the Ibadan powers. Also, Ife caved in, following the onslaught by Modakeke in a rebellion fuelled by Oyo vassal towns in the days of Owooni  Abewela.

Tradition has it that, when Ife was dispersed, the lot to “re-assemble” the ancient town fell on Olubuse, the great warrior, who invited dispersed people who had gone to sojourn in Ifewara and Ifetedo and its environs for the historic war of liberation. Olubuse Ere invoked the spirit of his forefathers, urging them to rise in defence of the cradle. He regained Edun Abon, Ipetumodu and other towns and silenced the Modakeke insurrection.

However, after his death, Owooni Ajagunlaforikan Ademiluyi renewed contract with Modakeke. It was in the early days of the colonial rule. He coveted the colonial purse, with an intention to enlarge his wealthy coast. Then, rulers received stipends from the authority, based on the population of their towns. But, when war broke out between Ife and Modakeke, Ife was again under siege. The acrimony pervaded in Ile-Ife and Modakeke until 1930 when an eminent prince, Adesoji Tadeniawo Aderemi, ascended the throne.

Aderemi’s coronation in 1930 was a turning point. It connected the past with the present. According to historians, as he was being crowned, a rainbow was said to have appeared. The palace was worried by the curious sign. Herbalists and other ancient fathers of secrets were assembled to interpret the signs. In unison, they congratulated Aderemi as they paid homage. The Ooni was informed that a prince had been born into the royal family. When a search was conducted, it was discovered that the son of Ooni Adelekan Sijuwade Olubuse 1 had given birth to a son. He was named Omo-Oba Okunade. The old people gazed into the future and told the king that he would live to an old age and prosper. They did not rule out the reality that a successor had been born.

Okunade Sijuwade was born into opulence. He was born with silver spoon in his mouth. When he was a student of Abeokuta Grammar School, he flaunted his background as a royal prince of the cradle. The principal, Canon Israel Oludotun Ransom-Kuti, was a disciplinarian. But, when he wanted to flog Okunade after committing an offence, the prince objected. He told Kuti: “I am the future Ooni of Ife.” Kuti was a highly respected Yoruba man. He was versed in the history and culture of the race. Before he was transferred to Abeokuta Confederation, he had served as principal in Ijebuland.

The principal took the young prince to his office. He made enquiries about Okunade’s claim. When he found out the truth, he exclaimed: “I will not cane the future Oba of Yoruba.” The old teacher admonished him to behave well henceforth, saying that anybody who aspired to lead Yoruba must not be found wanting.

After leaving Abeokuta, Sijuwade worked in his father’s company and in The Tribune before going abroad for higher studies. He returned as a big boy-a sales manager with Leventis Motors. He made money and ventured into private business. He recorded huge success. He became a philanthropist. His best friend was Bobo Doherty.

In December 1980, Sijuwade fulfilled his destiny. He had prepared for the throne in advance. It was a great privilege for him to succeed Aderemi, a former member of the House of Representatives and minister.  In fact, he contributed immensely into the rehabilitation of the palace during Aderemi’s reign. Prince Sijuwade was a king-in-waiting. Yet, there was no rivalry and mistrust between him and Sir Aderemi, who had ‘adopted’ him as a son.

One of his rivals during the obaship tussle was Dr. Ademiluyi, a respected surgeon. But, Sijuwade’s popularity, charisma and carriage dwarfed them all. The emerging political class was competing for the attention of the traditional rulers. During the formation of the Egbe Omo Oduduwa, which later became the Action Group (AG), Oba Aderemi was the patron, along with Pa Akinola Maja and Olowo of Owo, Oba Olateru-Olagbegi. The Alaafin, Oba Adeniran Adeyemi, was a fanatical supporter of the National Council of Nigerian Citizens (NCNC). Ooni’s support for the Egbe and AG gave the party an edge.

Thus, when he passed on, the political forces were at play again. The former AG Publicity Secretary, the late Chief Bola Ige, was the governor of Oyo State. The late sage, Obafemi Awolowo, the Odole of Ife and his wife, Mrs. Dideolu Awolowo, had given Sijuwade their blessing. The coast was clear for him to mount the throne of his forefathers. The coronation was celebrated throughout Yorubaland and beyond. In attendance were traditional rulers from all parts of the country. Even, Queen Elizabeth of England sent a representative.

After the ceremony, he embarked on tour of Yorubaland. He visited Oyo, Ekiti, Owo, Akoko, Ijebu, Remo, Egba, Benin, Popo, Sabe and Yoruba in Brazil. He donated to palaces, homes and schools.  Oba Sijuwade made HID Awolowo the Yeyeoba of Ile-Ife and later, Yeye Oodua of Ile-Ife.

But, crisis soon broke out in his kingdom. There was resumption of hostilities between Ife and Modakeke. Many people lost their lives. Buildings were in flames. Many houses were deserted. Travelers had a nightmare passing through Ife. Yoruba mourned over the fate of the cradle. It was a wide departure from the reign of Aderemi, who had married Segilola from Modakeke. But, historian cannot blame Oba Sijuwade. The acrimony dated back to the reign of his illustrious grandfather, Oba Adenekan Olubuse. Peace did not return until a separate local government was created for Modakeke.  Also, crisis broke out between the Ooni and other obas- the Alaafin, Owa and Soun of Ogbomoso- over the chairmanship of the Oyo State Council of Obas and Chiefs. The crisis was resolved when osun State was created. Ooni became the permanent president. The chairmanship is now being rotated among other first class obas.

However, Ile-Ife lost its bid for the capital of Osun State, to the consternation of Oba Sijuwade. The factors- centrality, as it were, past role of Osogbo as the headquarter of Osun Division and government preference favoured the rolling steel city. But, a local government with its headquarter at Enuowa, Ile-Ife, was created to compensate for the loss.

The tension between Alaafin Layiwola and Oba Sijuwade also intensified. Both made antagonistic claims as the overlord. Yoruba obas kept silent. Oba Adeyemi said he is the leader of the Oyo empire. Oba Sijuwade said the empire had ceased to exist. Recently, the Ooni upgraded some community heads into Obaship. His authority was not questioned.

Oba Sijuwade and the Oba of Benin, Omo N’oba Uku Akpolokpolo, also clashed. The Benin monarch had disputed the historical claim that Oranmiya’s children ruled Benin Kingdom. Some historians from Benin alleged that the legendary Ife prince escaped from Benin when he was about to be apprehended for an offence. The Olowo-Eko took sides with the Benin monarch. Oba Sijuwade cried foul. He said even Oba Akenzua acknowledged his Ife connection. He explained that, up to the 1930s, the official language at the palace of the Oba of Benin was Yoruba. Turning to Yeyeoba Awolowo at a ceremony in Lagos, he said: “You are the Yeyeoba of Yoruba, which extends to Benin.”

Oba Sijuwade also had to contend with political crises in Osun State between the Peoples Democratic Party (PDP) and the defunct Action Congress of Nigeria (ACN).

He was also unable to forge unity and cohesion in Yorubaland, which has been bitterly divided by the pursuit of antagonistic interests by members of the political class. 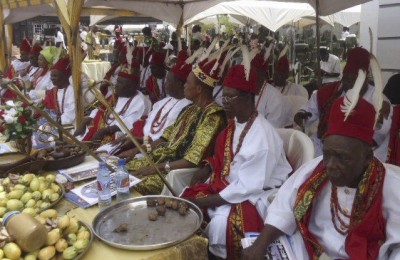 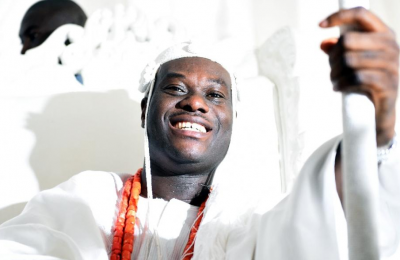 Yorubas celebrate the coronation of a new monarch, Ooni of Ife 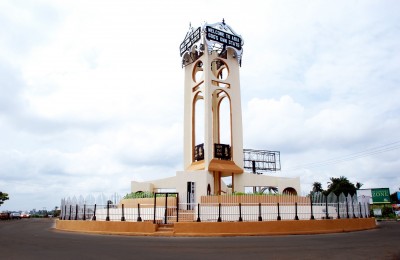