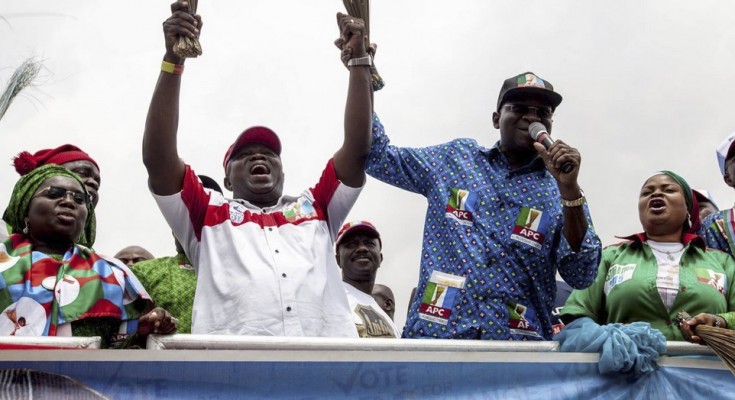 First let me thank you all for turning out to vote on the 28th March 2015 and for doing so peacefully to make history by electing the All Progressives Congress candidates in the Presidential and National Assembly elections.

Once again, I must address you as we approach Saturday’s elections, when you will be electing a Governor who will continue after me and consolidate on the progress we have built together.

You will also be electing members of the State House of Assembly who will make laws on your behalf to assist the Governor and his team in the Executive arm.

Although your votes will be cast for one political party or the other, let me remind you that you will actually be voting for your wellbeing, security, prosperity and future.

You will also be voting for the future of your children. You will be choosing candidates and a party that you will entrust your lives to.

Who has shown a better record and example of protecting and securing you between the political parties?

Which of the parties cares more when disasters happen?

What is the record of the parties as it relates to the promises they have made to you in the past?

Which of the parties do you see regularly and which one do you see once in a while?

Which of the parties do you see when your life or property is threatened by epidemics like Ebola or by unfortunate accidents like plane crashes?

Which of the parties is showing that you can become home-owners without knowing anybody?

Which party has responsibility for providing electricity for you, and which one is taking up the responsibility to light up your streets and communities at night?

Which of them cares more about your children and their safety?

Indeed ask yourself; which of the parties threatened you with thugs on that sad Monday of March 16th and which is seeking to protect you by supporting the police; with patrol vehicles, fuel and other equipment?

Ask yourself when last you saw the Federal Fire Service in Lagos. The proud men and women of the Lagos State Fire Service have taken over admirably.

Ask yourself who should be supporting the police and who is actually doing it?

Dear Lagosians, your choice of who to vote for will be easy if you answer these questions within yourself honestly.

Indeed, you have clear choices to make between parties that use your resources to develop your society and community on the one hand, and the party that chooses to bring money to you for distribution when election beckons.

Remember, that choices have consequences and your vote will decide the choice that shapes your lives.

I agree that the process can be made much easier. But it is no excuse to refuse to vote.

Think of all the pain, the effort, the sleepless nights it took to get the PVCs to you. Think of the best way to show that the effort was not wasted or in vain.

It seems to me that the best way is to have all these 3.8 Million voters come out to vote.

By refusing to vote, you surrender decision making to a few and you will be bound by the consequences of your choices.

By refusing to vote, you do a great disservice to many who have lived before you, who fought very hard at great personal costs to themselves, to earn you this right.

By refusing to vote, you dishonour the sacrifice of patriots before you who fought for the right to vote.

They have handed today to you and I, can we secure tomorrow for the next generation?

Remember that since the capital of Nigeria was moved from Lagos 24 years ago in December 1991, Lagos has been abandoned by the Federal Government.

Ask yourself when the last major new road in Lagos was built by the Federal Government. It was the 3rd Mainland Bridge completed in 1990.

This is not in accord with the spirit of the promise made to Lagos when the Federal Government first declared Abuja as the capital in 1976.

The Head-of-State at the time, the late Gen Murtala Muhammed, said then and I quote him:

“…Lagos will, in the foreseeable future, remain the nation’s commercial capital and one of its nerve centres. But in terms of servicing the present infrastructure alone the committed amount of money and effort required will be such that Lagos State will not be ready to cope.

(But we have coped at great sacrifice)

“It will even be unfair to expect the state to bear this heavy burden on its own. It is therefore necessary for the Federal Government to continue to sustain the substantial investment in the area. The port facilities and other economic activities in the Lagos area have to be expanded.

“There is need in the circumstances for the Federal Government to maintain a special defence and security arrangement in Lagos which will henceforth be designated a special area. These arrangements will be carefully worked out and written into the new constitution. Kaduna and Port Harcourt are to be accorded similar status and designated as Special Areas…”

Sadly, no Federal Government and indeed not the PDP Government has done anything to redeem that promise for the 16 years it was in power or to protect Lagos.

Instead of assisting Lagos, they attacked her. If you remember FERMA, in 2006, the same PDP seized your Local Government money and resisted the attempt to bring Government closer to you by creating more local Governments

On Monday 16th March 2015, the same PDP continued in their tradition of assaulting Lagos. Their supporters took over a major road in Lagos and threatened your peace and security.

On Wednesday 18th March 2015, the President-Elect, Muhammadu Buhari came to Lagos and said Lagos will receive compensation for the role she has played in maintaining Federal Government Assets.

Yesterday on Tuesday the 7th of April 2015, he was here in Lagos in his first political engagement since he became President-Elect and he reiterated his commitment to support Lagos.

It is the place where generations of Nigerians have arrived without knowing anybody but have, through the opportunities and inclusion, become somebody.

This is the place where the Late Chief Adeniran Ogunsanya and Owelle Dr. Nnamdi Azikiwe consummated the handshake across the Niger and played politics without bitterness.

Tell those who try to divide us that our greatest strength has always been our diversity.

Tell them that you feel safe here, and that I have continuously assured you of your safety as the basis of our mutual co-existence.

Tell them that our waterways have been assets of prosperity and sustenance, for transport, recreation and fishing and they will remain so.

Let nobody now attempt to re-write that history for you.

When they reel out statistics, please remind them that those statistics don’t stand in isolation, they are the burden of a whole nation and many parts of West Africa that Lagos state bears.

When they promise you heaven and earth, remember their broken promises on power, security and many more.

Ask them to show you a plan, if they can produce one, which is doubtful, ask them whether they have implemented it elsewhere.

Tell them that you have seen the Lagos Development plan for 2012 – 2025, that the Lagos Light Rail Project, the Adiyan Water Works Phase II of 75 Million gallons a day, the solar power for all schools and many more which are part of the plans for you and your children and which are already being implemented.

Ask them what happened to Vision 20:20, to the 7-Point Agenda and to Transformation.

Tell them that your bird in hand will not be traded for a dozen unseen birds in the bush.

Tell them that this election is about the place you call your home, the place you earn your living and the place where your investments are the safest.

Tell them that you will vote with common sense and for experience.

That will be the most historic thing you will have done, putting Lagos in the centre with your votes.