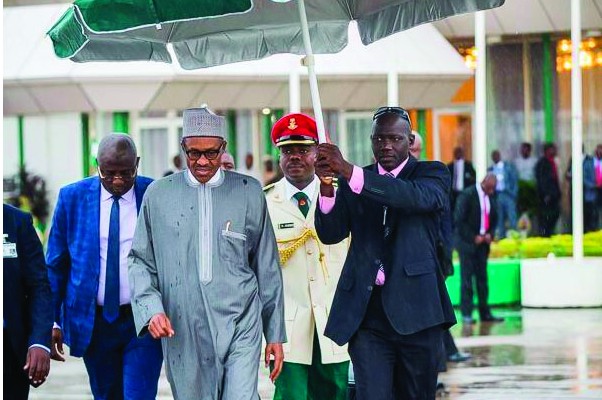 Hope for democracy in Africa as Buhari visits U.S.

Nigerian President Muhammadu Buhari’s meeting with President Barack Obama in Washington on July 20 is an important symbol of the significance of an unprecedented peaceful, democratic transfer of power from a defeated ruling party to the opposition in Nigeria. That symbolism matters for the development of genuine democracy in Africa.

Nigeria matters. With 179 million people it is Africa’s most populous country and, with a GDP of $569 billion, the continent’s largest economy. The West African country’s large diaspora in the United States includes nuclear scientists, doctors and other professionals that contribute significantly to America’s progress. But Nigeria, afflicted at home by a predatory political class, corruption, and military dictatorships for much of its52 years as an independent nation, has performed well below its well-known potential. It is not coincidence that President Obama’s trips to Africa have by-passed Nigeria.

Now, Buhari’s visit at Obama’s invitation is only one of several indications that the country is beginning to reclaim the respect of Western governments and its natural leadership role in Africa. But huge challenges remain, from the depredations of the terrorist group Boko Haram to the near absence of electric power to drive real economic transformation, unemployment and a dilapidated public education system. And many Nigerian institutions have been progressively weakened by their use as instruments for partisan political power plays. The private sector is virile, but the absence of transformational public policy means that the country’s economic growth, at an average of 7% annually for the past decade, benefits only an elite few. Poverty remains widespread.

The solutions for many of these challenges lie at home and not in Washington, but Buhari’s meeting with President Obama has strong potential to break down a wall of mistrust that existed between Washington and Buhari’s predecessor, Goodluck Jonathan. This mistrust affected the extent and effectiveness of US-Nigerian military and intelligence collaboration to combat terrorism. Perhaps Washington will now back Nigeria’s homegrown anti-terrorist efforts more wholeheartedly.

Buhari will also need US support in his fight against corruption and his government’s efforts to recover stolen Nigerian assets in foreign countries. Ascetic, and with a consuming disdain for corruption, Buhari is a rarity in the Nigerian political firmament — the former military dictator who ruled Nigeria with an iron fist for 20 months in the mid-1980s before he was ousted by another coup, is now a born-again democrat. He was elected largely on the basis of his anti-corruption credentials. Measurable success in this area will be an important test for his government.

But his start has not been auspicious. Immediately after he was sworn in on May 29, Nigeria’s Democracy Day, his party, the All Progressives Congress — an amalgam of different opposition parties united only by a burning desire to sweep away the Jonathan administration — has nearly imploded from an internal wrangle over leadership postsin the country’s parliament. Precisely because expectations of him are so high after years of disappointing leadership, Buhari’s honeymoon with Nigerians will be brief. He has just four years to make a dent on Nigeria’s problems before facing the voters again. Civil society organizations have already established a “Buharimeter” to measure his performance.

Despite a difficult start, Buhari can make a strong transformational impact if he can bridge the yawning ethnic and religious divide between Nigeria’s predominantly Muslim north and the mainly Christian south and achieve a constitutional restructuring that addresses a distorted federalism that has hobbled Nigeria’s potential. Only if his values outlast him as part of the Nigerian political canvas will he succeed in his mission.

As Buhari meets Obama, US-Nigeria relations should not be a one-dimensional focus on Boko Haram and terrorism. US-Nigeria ties must seek enhanced export trade opportunities for Nigerian entrepreneurs under the Africa Growth and Opportunity Act (AGOA), especially now that the US, powered by the shale oil boom, has become self-sufficient in its energy needs and virtually stopped importing Nigerian crude oil.

Beyond this, there are opportunities for American investment in a market that can offer solid returns. These include investments in lighting up Africa’s powerhouse with electric and renewable power, investments in educational institutions that will create human capital needed to drive innovation and transformation, and a huge need for affordable, patient capital in a country with little remaining patience and little capital. This is how democracy in Nigeria and many African countries can deliver a better life for citizens.

Kingsley Chiedu Moghalu is former deputy governor of the Central Bank of Nigeria, and the author ofEmerging Africa: How the Global Economy’s ‘Last Frontier’ Can Prosper and Matter.