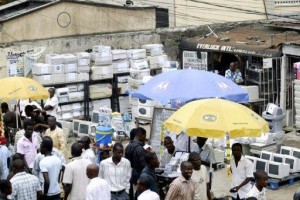 The challenge of transforming the country into an investor’s delight was faced headlong by our former President Chief Olusegun Obasanjo who personally travelled around the world selling the country to prospective investors.  Today, our dear Minister of Information and Communication; Prof. Dora Akunyili has introduced Rebranding as a major plank of properly repositioning Nigeria and her potentially great people in the comity of nations. Thus, the new brand name for Nigeria is Great people, Great nation.

Fifty years into political nation hood, Nigeria is still rebranding; telling its people to “jinja dia swaga”; or wake up from their slumber and begin to seriously work for genuine greatness. This drive for greatness is being faced with numerous challenges of which the craze for okrika is one. For those that may not know what the word stands for, the question would be wetin bi okrika; what is okrika?

In Nigerian Pidgin parlance, the word okrika is used to qualify any second hand clothing. Other local epithets for any of such item includes “ben daun butik”, “ben daun select”, “gbogbo”, “gwanjo”, etc.  The way and manner people go after it lives one wondering the damage it’s doing to our image as a people desirous of greatness. A friend of mine expressed his disgust for second hand clothing or item this way; hau pesin go wie wetin anoda pesin don wie? (How would one wear what someone else had at a time worn?). Another friend of mine would usually say; mek ah tek mai moni bai wetin anoda pesin don wie? Na im bi se ah de Cres bi dat (should I buy what someone else had previously worn, it follows that I am out of my senses). But in defence of the olmaiti okrika, another friend said that not all what we call okrika is truly okrika because some of them are completely new (only packed along with old/used clothing).

The likeness or disdain for okrika has nothing to do with class. Therefore one’s interest for the item gradually develops over time into a strong habit leading to the common phrase; okrika na diziz. Whenever you hear anyone say okrika na diziz, it means that as an habit of buying the item, it has eaten deep into the bone marrow of the one that regularly goes for it. While some would never want to hear of it, there are others who think and sleeps okrika. This category of people have special sellers who brief them on the expected time of arrival of the next okrika we de fo hai “sea”. The general thinking and belief of members of this group is that na okrika de las pas (second hand items are more durable) in comparison with new items. Consequently, there’s a phenomenal increase in the importation and patronage of Okrika which is totally out of sync with the tenets of rebranding.   The importation and sale of okrika is a big business. As patronage for the item increases, the number of those that frowns at it drops. Rebranding or no rebranding, the following questions would suffice; is it possible to completely stop the importation of second hand clothing into Nigeria? Who are those that patronise second hand clothing?

As a business, it will be an uphill task implementing any ban on the importation of second hand clothing as well as its patronage in Nigeria. The patronage of okrika lies in the fact that it’s available everywhere. However, it will be appropriate to state here that okrika no bi poor man klot; okrika is not synonymous with those who are poor.

Recently, I went to Wuse Market in Abuja to do a first hand check of how okrika was being sold and bought. I was startled to see big guys and ladies who parked their big big moto de du ben daun select or make a choice from a heap of assorted second hand clothing (okrika). I pretentiously joined in making my choice. The following is an interesting conversation between yours sincerely and a fellow patroniser:

Me: Na so di tin plenti ye? (So you have so much of okrika here?)

Patroniser: Na fo ye ah de bai ol mai oun (this is where I buy all my second hand clothing)

Me: Na mai fes taim bi dis (this is my first time here)

A visit to any spare parts market in Nigeria is a nightmare many car owners wouldn’t want to experience. Car owners are made to believe that enitin beljium na im beta pas; second hand spare parts are promoted as better off and durable in comparison with the new ones. Fakes are every where pretending to be original  while genuine people are battling to correct the system.  We must wake up to correcting the okrika syndrome that has eaten deep into the fabrics of our society. The title of this piece “okrika na yu biko” simply means okrika you ar on top (winning). Is this what we deserve as a nation hoping to celebrate 50 years of political independence?

2 thoughts on “Nigeria: A ‘second-hand’ country?”