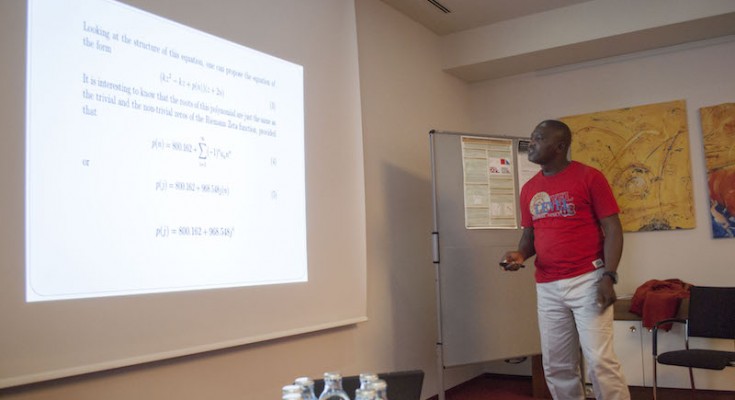 Professor Dr. Opeyemi Enoch of Federal University Oye-Ekiti who recently became a media sensation for solving Riemann Hypothesis, a 156-year-old math problem has been accused of plagiarism. Major Nigerian and international media, including BBC News, recently published news story about Dr. Enoch’s achievement and the $1 million prize awarded to him.

A math Ph.D student at Yale University, Senia Sheydvasser, however has debunked the claim on Quora. Mr Sheydvasser, also cited by an online news platform QUARTZ, accused Dr. Enoch of  being “fake” and “plagiarism.”

“I decided to look up the proceedings of the International Conference on Mathematics and Computer Science. Indeed,  there does seem to have been a Dr. Enoch who spoke at this conference,  and who talked about the spectral theory interpretation of the Riemann  Hypothesis. However, the abstract does not seem to suggest that Dr.  Enoch was announcing a proof of RH,” said Sheydvasser.

“Surely such an  important paper would have to be published somewhere? Perhaps it would  be on ArXiV or elsewhere on the Internet. I decided to have a look. I  can’t seem to find any trace of something like “A matrix that generates  the point spectral of the Riemann Zeta function”, which was the title of  Dr. Enoch’s talk.”

QUARTS also suggest that Dr Enoch may have fooled the media. The online news channel wrote that “US-based Clay Mathematics Institute [responsible for overseeing the seven Millennium mathematic problems, including Riemann Hypothesis proposed by German mathematician Bernhard Riemann in 1859] has refused to confirm the news of Enoch’s solution, instead saying “the current status of the problems and complete information about each” is available on the institute’s website”.

An investigation into Dr. Enoch’s claim shows that he has published 17 research work in local and international journals.  The latest being “A Method for obtaining the nth Derivative Of a Function of the Form y = l1 (x) l2 (x) l3 (x) l4 (x); published in elixir International Journal of Discrete in 2013.

The International Conference on Mathematics and Computer Science (ICMCS), however, backed  Dr Enoch’s claim. A representative of ICMCS, Dr. Nina Ringo, said  in an email  that”Mr. Enoch Opeyemi  has made an Oral Presentation “A Matrix That Generates the Point Spectral of the Riemann Zeta Function” at the conference ICMCS 2015 in Vienna. I consider his results to be very important and confirm his discovery.”

At the the time of publishing this story, we are still expecting Dr Enoch’s reactions to the accusation. We’ve also requested him to consider sharing his work with our audience.