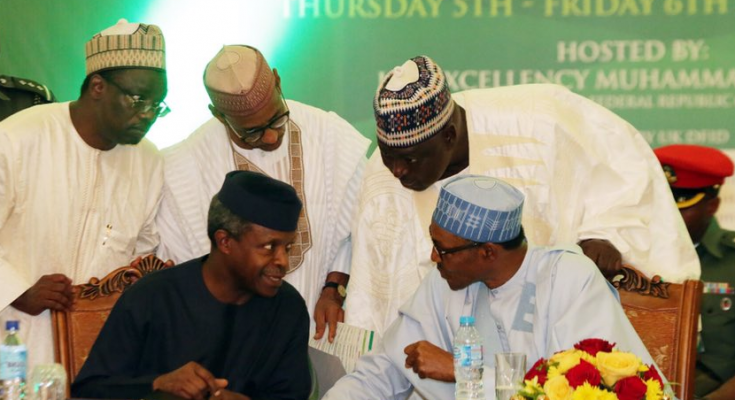 Before a skyscraper rises out of the ground and becomes a towering edifice, the foundation must go deep into the ground, sometimes as low as 150ft. Month after month, the labourers continue to dig and build, their diligent work taking place completely out of sight. In the same period it takes to complete the foundation of a skyscraper, several duplexes may spring up nearby. Concerned onlookers may wonder about all the time invested in an unseen structure and ask, “But why can’t we see the building you say you are building?”

During the past few months since he took on the mantle of CHANGE, President Muhammadu Buhari has been restructuring the foundations of the Nigerian government, which have disintegrated and putrefied over decades of mismanagement. He has been busy cleaning out debris and plugging loopholes, before laying new and fresh blocks. When he spoke to them at the three-day retreat welcoming them to the cabinet, the President told the new ministers that “ we have already taken deliberate measures to plug leakages of government revenue and resources.”

The Treasury Single Account (TSA) is one example. Under this new system, all government revenue, income and payments are being handled via one single account which will be maintained by the Central Bank. This way, the government will have direct supervision of inflow and outflow. Cases such as that of Nigerian Maritime and Security Agency, NIMASA (currently under investigation by the EFCC) where billions of dollars were channelled for questionable purposes will be a thing of the past. Nigerians can expect more transparency and less misappropriation of funds by agencies of government. Government will begin to realise her revenue in full measure and agencies will be able to spend only within their budgets.

Still on the issue of government revenue, the prospect of the Nigerian government generating more money through the Nigerian Customs Service is set to increase with the change of management that was effected recently by the Buhari administration. With accountability and integrity at the top, Nigerians can expect that revenue from that agency will double or triple.

The Ministry of Finance just got the customs to repair broken down scanners at the ports to ensure maximum generation of revenue. Officers had left the scanners unrepaired, and in some known cases deliberately sabotaged them so that assessment is done manually to satisfy greed on their part.

The Federal Inland Revenue Service (FIRS) has also begun to implement a programme of increased awareness among Nigerians regarding the payment of taxes. This is being followed by a strict programme of persuasion and enforcement. Within a short while, the Nigerian government will begin to realise a marked increase in revenue from VAT.

All these foundation blocks have been laid to ensure that the Nigerian government has enough revenue with which to make life better for every Nigerian, especially as the price of oil continues to look precarious.

These measures, taken together represent a major push by the President to increase internally-generated revenue, reduce over-dependence on crude oil earnings in a way that will bring stability and predictability in the financing of government programs.

The situation of the economy is not an ordinary one. It is a crisis, a crisis itself inherited by the Buhari administration, and one that cannot be ignored. Two weeks ago, the International Monetary Fund, IMF predicted that the GDP growth in sub-Saharan Africa would fall to 3.75 percent in 2015 which is the lowest in the last six years.

Nigeria along with Angola, the leading oil economies on the continent have been hit hard by oil prices which have gone down by more than 50 percent in the last 12 months.

It is on account of this that the President warned the new ministers of what to expect:

“The work of restoration and renewal is urgent and immense. The expectations of Nigerians are high. Our determination to succeed and change the fortunes of our country must be equal to the challenge.

“I have invited you to join me in this urgent mission for our country. I am convinced that in accepting this invitation you are also equally determined to take part in this patriotic undertaking.

So finally, the underground work is coming to an end. With the inauguration of ministers taking place on Wednesday, it is now time for Nigerians to watch the edifice of CHANGE begin to rise out of a new and strong foundation. Our country’s season of austerity is coming to an end. Life will get better for every Nigerian, in every geopolitical zone of our country.

As President Buhari said in the opening address during the retreat that took place last week, “You are coming on board the ship of governance at an interesting time. So much has been said about the state of our economy. It is expected that we make the running of Government at all levels as lean as possible, avoid waste and conserve resources. As ministers, you must be the vehicle that will administer the change.”

President Buhari, who shrugged off “experts”and their “scientific” predictions to receive a historic mandate- the first time that an opposition candidate defeated an incumbent administration since independence has been speaking of the huge popular expectation of Nigerians who gave this mandate. They are waiting, impatient and agitated.

The new ministers will do well to pay heed to the President’s call for prudence, austerity through the avoidance of the type of extravagance that had weighed down the finances of government in the past. Under the past administration, some ministers had as many as 15 special assistants and so many policemen in tow.

Let the new ministers learn from the President who game a recent directive that he didn’t want have more than eight vehicles in his convoy.

Nigerians should get set to see and experience more of the CHANGE for which they voted overwhelmingly for the Buhari administration if the cabinet avoids micromanaging specifics and kowtowing to God-father interests to join the President in putting policies in place to make the country a favored destination for investors both global and local.

There is little doubt that there is light at the end of the tunnel although it will take much hard work to make it a new dawn.

Mallam Garba Shehu is a Senior Special Adviser on Media and Publicity to President Muhammadu Buhari.