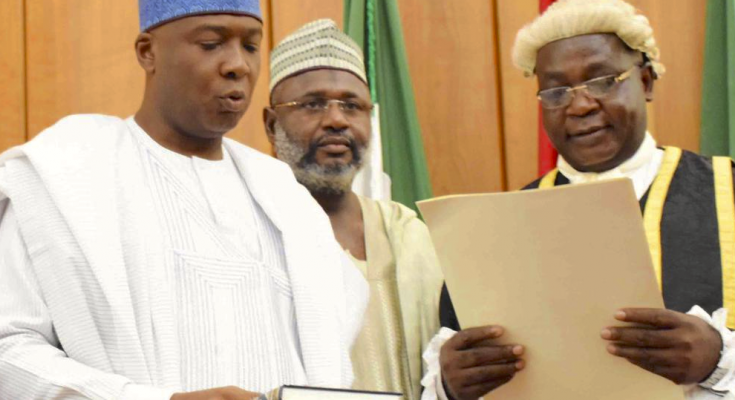 Newly elected Nigerian top lawmaker, Senator Bukola Saraki, has been challenged to retrace his steps and recommit himself to the progressives’ mission and the aspirations of millions of Nigerians who voted for President Muhammad Buhari to bring about change in governance, especially at the national level, according to an international political group, Progressives Super PAC.

The Progressives Super PAC accused Senator Saraki of disloyalty and of actions capable of unsettling the Buhari’s administration for the purpose of positioning himself and a group of politicians towards 2019 elections in a communique made available to journalists. The group says, although, it is not against Saraki’s political ambition, it however found the “power play” projected by the former Kwara State governor distasteful and anti-progressive.

“Because of  the ill-advised actions of Senator Saraki by some wolf-like politicians, the sacrifice of Nigerians home and abroad to restart the process of national libration and reconstruction is now under undue pressure,” the group declared.

Saraki was elected as Senate President several weeks ago after a high-level of political power play that saw many leaders of the All Progressives Congress, including Lagos strongman Bola Tinubu, caught unguarded and shocked.

“We have evidence that in his quest to become the Senate president and project himself as a power broker towards 2019, Saraki compromised his social and political clout by collaborating with opposition politicians to unsettle this new administration as being led by President Buhari, whom millions of Nigerians have entrusted with tasks to begin the process of rewriting the wrong caused by many years of failed leadership.”

The political action group further ask Nigerians not to be discouraged by ongoing events in the National Assembly.

“The change that Nigerians said yes to earlier this year is a process and not an end itself. This is the beginning of our collective will power to liberate Nigeria from the shackles of past misgovernance and oppression in the hands of some political cabals that are only after their personal interests.”

Political analysts have described events that saw the election of Saraki as Senate Presidents as a move to reduce the influence of Tinubu, a former governor of Lagos, whom many have credited for leading the movement that saw the defeat of former president Goodluck Jonathan and the People’s Democratic Party.

The Progressives Super PAC also challenged the Senator Saraki to prove doubters wrong that he is committed to the change movement by using his influence to stop corruption in the National Assembly.

“We ask our lawmakers to reduce their salaries within 100 days in office to reflect Nigeria’s economic status and to pass a new law that requires elected public official at the national level to publish detail of their salaries and other compensation on a government website every year. This will set an example for other levels of government and bring about transparency and accountability,”  the group says.

“Come out clean now and redeem yourself, Saraki,” the group’s communique concluded.