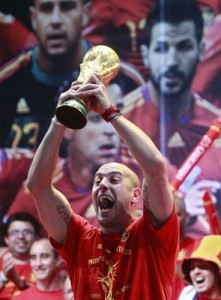 The historic Spanish victory came after a dirty match against the Netherlands with a record-high 14 yellow cards and numerous goal opportunities just shy of success.

Packed Spanish bars erupted last night as seas of supporters dressed in red with their faces painted watched goalkeeper Iker Casillas lift the cup, surrounded by his teammates under a shower of confetti.

The victory comes on the heels of the team’s 2008 European Championship title, and some say the squad has started a new era for Spanish football.

The German octopus ‘Paul,’ who had made seven consecutive accurate World Cup outcome predictions before the final, must have been proud to see his eighth and final prediction come true last night.

“The octopus will be very popular in Spain,” said World Cup hero and man of the match Iniesta.
Midfielder Sergio Busquets wore his newly updated kit with a single star on it to represent the Spanish World Cup victory as he celebrated after the match.

Saying exactly what crazed fans across Spain were thinking, Busquets put it simply: “We’ve been waiting a whole life for this.”