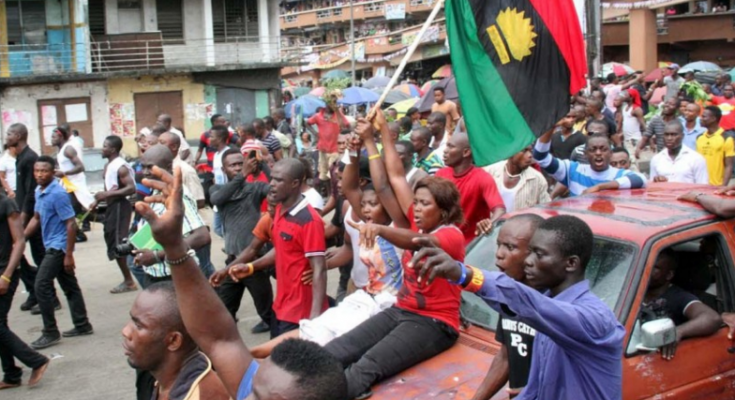 Why Nigeria must halt pro-Biafra agitations

As a patriotic Nigerian I condemn in strong terms the potential threat to Nigeria’s unity as a result of the activities of some pro-Biafra group, which I believe is politically motivated by some treacherous individuals.

Nigerians have put behind them the ugly memories of 1967 to 1970; Nigeria was the theatre of a cruet and bloody civil war that is commonly known as Biafra War. The conflict allegedly originated from internal crisis such as tribalism and political failures of the civil government after the independence, as well from external influences by the ex-colonial powers. The war, which ended with Biafra surrender, confirmed the military as holder of power starting a long period of political dominance in Nigeria history.

Unfortunately those who are currently behind the protests were youths who have little or no idea of what the war cost Nigerians as well as the collateral damage the country suffered as a result of the 30 months war. Although I believe very strongly that the campaign was being driven by just a few people, though it is true that, majority of the Igbo people do not share this secessionist view.

Arguably, the Nigerian civil war, unlike other wars across international boundaries, was a war of unification, a war of reintegration. It was therefore a much more difficult war for the Federal field commanders to prosecute with the objectives of unification in mind than wars fought against aggressors on foreign land.

The human aspect was paramount. It was a contradiction and complication not easy to resolve – how to fight causing only limited destruction, how to inflict wounds and heal at the same time, how to subdue without fatal and permanent injuries, how to feed and house civilian population without exposing our troops to danger and risk of saboteurs and infiltrators, how to achieve surrender without inflicting permanent or long lasting psychological humiliation.

Thankfully at the international scene, the British government has said it does not support the agitation for a separate nation of Biafra, the High Commission in Nigeria said in a recent statement. I personally salute the stance of our former colonial master in this.

The war had come and gone. The story of the war and what led to it has been told, is being told and will continue to be told. What seems to me a human tragedy all through ages is the inability of man to learn a good lesson from the past so as to avoid the pitfall of those who had gone before.

Looking inward, the Ifes and Modakekes would not easily forget the gory situations that remain a perpetual scars in the minds of the generality of their people, likewise the Warri and Itsekiri war that left hundreds of women, children and other vulnerable groups dead and destruction of properties worth billions of naira.

As a result history tends to repeat itself. However, there are exceptions of nations and men who had learnt from history to avoid collective and individual disasters or a repetition of such disasters. I feel confident that Nigeria must join the group of these happy exceptions if we are to have political stability, economic progress, integrated development, social justice, contentment and be the epicenter of African solidarity.

The need to nip it in the bud can not be over-emphasized, and to do just that requires collective responsibilities, States of the federation must start disowning them, institutions such as National Orientation Agency, Human Rights Commission and the National Assembly must also lend their voices in strong term and in unity to condemn this disgraceful act that may consume all of us if adequate care is not taken. Quite frankly we can not afford to compromise our peaceful co-existence as a nation.

I therefore urge the Nigerian government led by President Mohammed Buhari as a matter of urgency to show proactivenes and to also persuade and send strong warning to agitators of Biafra nation to desist from such acts. This extreme ideology should not be tolerated, condoned or encouraged. The trend is capable of leading to breakdown of law and order and subsequent destruction of lives and properties of Nigerians. Federal government must do the needful before it is too late.

Consequently, our security agents should observe the best principles of minimum force and proportionality at all times. And as custodians of our security, every reasonable effort should be made to control the situation through measures short of the use of maximum force even as they are expected to stem the tide in the nick of time. God bless Nigeria.