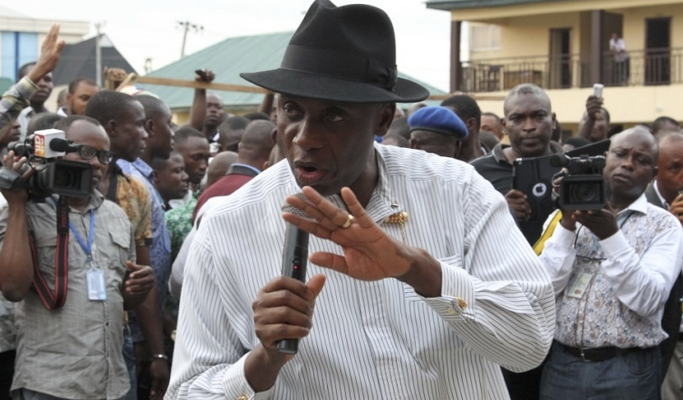 Port Harcourt - Rivers State Governor and Director-General of Buhari Campaign Organization, Rt. Hon. Chibuike Rotimi Amaechi has described Saturday’s Governorship and House of Assembly elections in the state as a sham.Amaechi made his position clear while fielding questions from journalists after casting his vote at Ward 8, Unit 14, Ubima in Ikwerre Local Government Area of the State.He said the elections witnessed thuggery and ballot box snatching in most parts of the state coupled with violence.Referring to the election, the governor said: “I think it is a sham.  You noticed what happened in Omagwa, what happened was that somebody called me and said they were been attacked at a particular polling booth and I went there, the thugs were overwhelming until another group of soldiers came before they ran away.“Don’t forget that the report was that our people were been attacked, so I came to rescue the people who were been attacked.  When we came, you saw the thugs yourselves, so how do you stabilize the system when already the system has been taken over by thugs?”He noted that the Nigerian Police failed in their responsibility to the people to provide peaceful atmosphere for the electoral process.“I think there must have been an arrangement between the police and the PDP for the state to be overrun by thugs and you know, the funniest part is that the Inspector-General of Police (IGP) promised us over 2,800 mobile policemen.  What you see is just one Deputy Commissioner of Police John Amadi orchestrating conniving with the PDP to orchestrate all these violence against APC members and Rivers people.“Yesterday, Mr. President(Goodluck Jonathan) withdrew the Assistant Inspector-General of Police (AIG) Tunde Ogunsaki and ordered him to go back to Calabar just because he arrested a DPO who took out four wards result sheets and gave to militants working for PDP”.Amaechi said that thuggery, violence and hijacking of electoral materials marred the electoral process across the state.“You have been following me around and I am sure you must have seen the kind of thuggery that was on display, you have seen materials been hijacked”, he said as he noted some election officials were ambushed along the way by political thugs.He blamed the retention of INEC Resident Electoral Commissioner in the state Gesila Khan for the cause of election malpractices in the State.“If INEC had posted the Resident Electoral Commissioner (REC) away, we wouldn’t have been here.  If the Commissioner of Police and the President had allowed the police to function properly, we won’t be here.”“In the Ogoni area, you have one Area Commander, an Assistant Commissioner of Police, harassing people, arresting APC members. Then you have in the state DCP John Amadi. By 2a.m this morning, he was busy in Nyesom Wike’s father’s house writing results.”