Support for the National Chairman of the All Progressives Congress (APC), Chief John Oyegun mounted on Friday  as prominent leaders of the party lauded his leadership qualities, describing him as “the most distinguished party chairman in the country”.

They said that the national chairman created the framework that brought about the victory of many APC candidates in the general election.

“Oyegun supervised the turnaround of the party by increasing its finances, building the operations and implementing the best ground game effort.

In a statement issued in Abuja by the Chairman of APC United Front, Alhaji Ibrahim Musa, the leaders dismissed the view of those calling for the resignation of John Odigie- Oyegun.

“His contributions to the development of the APC, Edo State and the country are impossible to estimate. He kicked out the long –ruling PDP. He provided Nigerians with a visionary, dedicated and people-oriented leadership that is currently putting in place measures to liberate the nation from PDP’s rule of poverty and oppression” the statement said.

The leaders praised the national chairman for his strategic roles in the recruitment, retaining of members, campaign fund raising, internal party governance, influence in candidate selections and in the development and promulgation of party policy.

The leaders who also thanked Nigerians at home and abroad for the confidence reposed on Oyegun, praised him for the pragmatic steps taken to address the problems in the party.

“Oyegun is an honest and highly effective leader. He has built a reputation anchored on integrity over the years. He is a fountain of quality advice, inspiration, encouragement and hope. He deserves the biggest thanks for being a team player and ensuring the growth of the party” the leaders added. 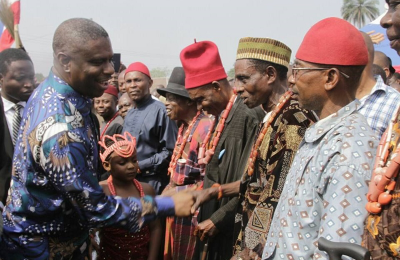